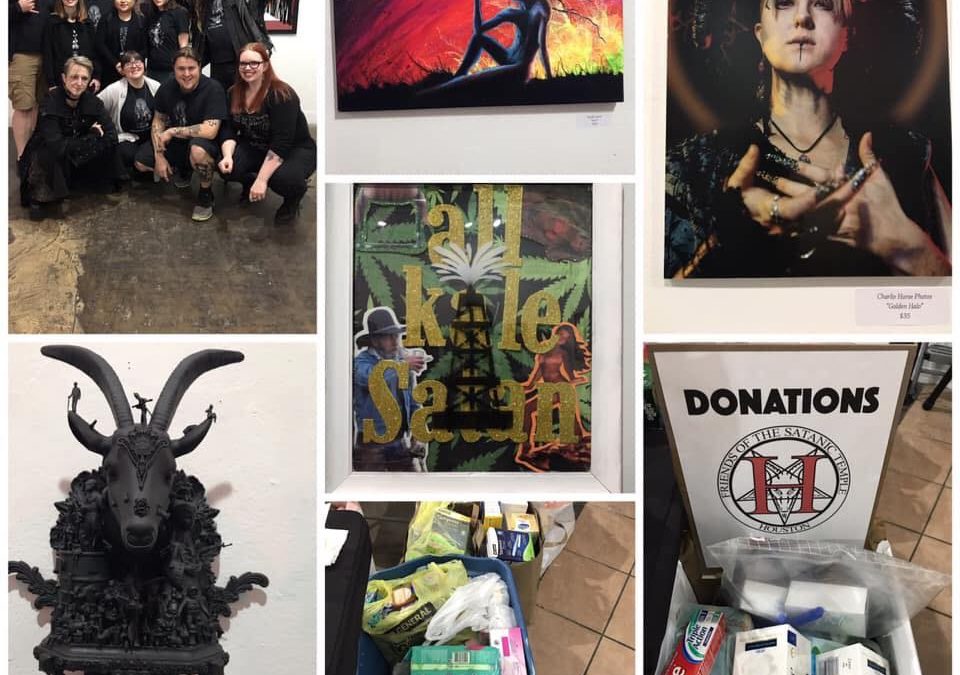 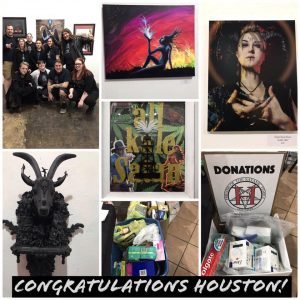 Can Satanists do “good”? Hell yes! In their first annual charity event Friends of the Satanic Temple – Houston partnered with The Montrose Center of Houston for “Left Hand Illumination: Vision of the Occult”. It included a gallery showing held on Sunday, December 2, 2018, 4-10pm at Insomnia Gallery. In addition to being a great success, the event launches the Friends group into an official Houston Chapter of The Satanic Temple.

Houston area artists donated an inventive array of occult-themed art that were displayed on gallery walls. For entry, monetary donations or supplies for The Montrose Center were accepted. Supporters also donated supplies leading up to the event via an Amazon Wish List set up by The Friends of The Satanic Temple Houston. Supplies included items such as menstrual products, underwear, socks, bar soap, and other toiletries.

The charity was a burning success with 165 people attending.  $1.6k and several car loads of supplies were donated to The Montrose Center. Many Friends of the Satanic Temple Houston members personally delivered the donations and all are enthusiastic about working with the non-profit in years to come.

Why Satanists support The Montrose Center and LGBTQ+ Communities

The Center has helped several members and affiliates of the Houston chapter by providing services. This is why Houston’s Satanic members feel the charity event is a fantastic way to give back to an organization that has given so much to Houston’s LGBTQ+ community.

The Satanic Temple has supported LGBTQ+ rights since its foundation and does not define members by their sexual orientation. Lucien Greaves, spokesman and co-founder of The Satanic Temple says “Within the Satanic Temple, we’re all pretty much one and the same. We’re all Satanists and it’s not like we have ‘tolerance’ for trans people or gay people or sex workers, we just don’t fucking care, and a lot of people in those communities appreciate that.”

For details on this and other events visit our Public Calendar.

Are you a Houston-area artist interested in participating in “Left Hand Illumination”? View our Artists Call.